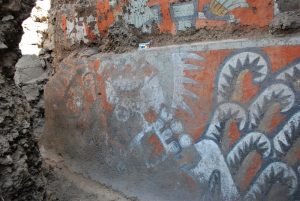 One of the striding Teotihuacan warriors represented in the polychromatic murals from the site of El Rosario (Queretaro). The mural program has fundamentally changed our view on Teotihuacan’s imperial expansion to the north (photo © Proyecto Arqueológico El Rosario).

In this talk, I discuss current knowledge of what may have been the largest empire in Pre-Columbian Mesoamerican history – controlled from the sprawling capital of Teotihuacan in the central Mexican highlands. For the past 20 years, this has formed one of my own research topics, beginning with an examination of the spread of Teotihuacan iconography into the Maya area in the late 4th century. In the past decade I have been involved in work on Teotihuacan-style iconography in other parts of Mesoamerica, in particular the present-day states of Queretaro, Michoacan and Guerrero, and what have become increasingly clear is that Teotihuacan presence has left us with traces of an imperial iconography with a standardized repertoire of motifs related to warfare and conquest. The contours of a more complete image of a vast empire thus begins to emerge. At the same time, new findings at Teotihuacan itself adds to our understanding of how the metropolis attracted people from several of the provinces, revealing a highly complex interaction sphere between the centralized imperial power and some of its most distant enclaves.

The Institute of Fine Arts—NYU